Another Day in Paradise
​ 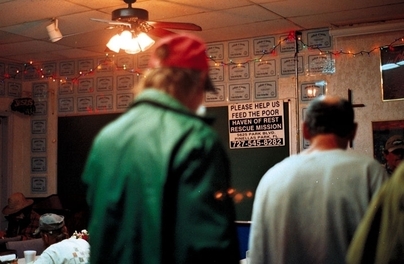 What do you think of when you hear the term "homeless"?  Do you envision someone disheveled-looking, stumbling along, smelling of stale alcohol? Maybe the person has other substance-abuse problems or underlying mental health issues and talks to himself (or herself) while staggering along the sidewalk.

While there are enough homeless people who seemingly fit the stereotype above, more often, the homeless are everyday people who, for a variety of reasons, ended up on the streets.  Some have lost a job, or are trying to support a family by working several minimum wage jobs; others are escaping  domestic violence in an area where there are not enough shelters to house d.v. victims.  Still others move cross-country for the promise of a better life: better jobs, cheaper housing, warmer weather, only to have their dreams shatter.

Another Day in Paradise will explore homelessness in Pinellas County on Florida's west coast by weaving generalizations - how many homeless in the county, the make-up of this population (families, veterans, domestic violence victims, etc.) - among the stories of three or four individuals and/or homeless families in their struggles to get off the streets.  The documentary will explore how these individuals/families became homeless, how they obtain(ed) help in getting off the streets (including any help from local shelters), and what message we can learn from the homeless, including why the homeless matter.

​This documentary is slated to be finished by early January 2017.

How does one describe Salt Creek Artworks?  Is it the building, the artists working inside, or the galleries with occasional shows?  It is all of the above, and more.

Located in south St. Petersburg, Florida, between Fourth Street South and Salt Creek, the building has housed artists' studios for the past twenty years.  Owned by the same family since the 1940s, portions of the building are 100 years old.  Prior to the artworks, the building housed a furniture store; when the store closed, the family built artist studios and galleries for the local art community.

Several years ago, the owners had to sell the building; the new owners planned to raze the building for parking.  This meant displacing the artists, most of whom had had studios in Salt Creek for years.

During this tumultuous time, many of the artists met weekly to discuss possible buildings for the group to move to, while others decided to venture out on their own.  RSP filmed and photographed the sad demise of this wonderful place.  Photos and bits of film will be posted at various times...

We have a litte more filming, interviewing and photographing to do, though at this point, most of the work is sifting through tapes, seeing what will be used in the final documentary.  We've posted two short pieces on YouTube.  Please keep in mind that they are far from the final film; they are simply a rough start.  They can be found here: http://www.youtube.com/watch?v=xgdT2PMgz10&feature=plcp and at http://www.youtube.com/watch?v=ilMkBR7B8EQ .  Also, please check the photodocumentary page for Salt Creek photos.  At this point, the completed documentary is slated to be finished in October, 2016.

Portions of this project - as well as some of the brainstorming for it - can be found on our other site, located at http://brainstorming4work.wordpress.com.

How We All Can Make a Difference

I've noticed a peculiar phenomenon I call Earth Day Energy (you may have noticed it, too).  It goes something like this: Each year, when Earth Day rolls around, people get charged up with cleaning the environment.  Groups gather, clean an area near them, recycle...and forget it for the rest of the year.  The same phenomenon happens after televised concerts for the environment.

Who hasn't gone to the beach, a nature park, a pristine area of wilderness to relax, only to find garbage/pollution ruining the experience?  Don't we all want our children and grandchildren to be able to appreciate a sunset or sunrise over the ocean, go sledding on unpolluted snow, or see nature in all its glory?  I know I do.  I also would like my children and grandchildren to be able to drink water, eat their food and breathe without having to worry about weird chemicals causing irreparable harm.

Remember Love Canal?  It was supposed to be a wonderful neighborhood, but it turned into an environmental nightmare: higher than normal rates of cancers, for starters.  The earth under the subdivision was a toxic wasteland.  (http://www.epa.gov/history/topics/lovecanal/01.htm)  Who is responsible for blowing the whistle on Love Canal?  It was a housewife named Lois Gibbs, a mother with a high school education.  (http://www.ecotopia.org/ehof/gibbs/index.html)

And who can forget Erin Brockovich, the activist immortalized in the movie of the same name?  She was a single woman trying to raise three children, who just happened to be just a little upset that PG&E's actions had put the health of Hinkly, California's citizens at risk.

The documentary is in its early stages of production.  Completion tentatively slated for early- to mid-2017
******
The very beginning stage of this can be found at: http://www.youtube.com/watch?v=WoBx4VEPyZ8.  This was turned in for independent research at the University of South Florida St. Petersburg's Mass Communcations program.  Keep in mind that this is just the beginning and will grow from here.

I have started posting video shorts on YouTube.  These are videos done for different occasions; some may end up in longer documentaries, but they also document a very specific event.  To check these out, go to http://www.youtube.com/user/rjshwedo?feature=mhum .
Powered by